Our precious planet Earth acts like a huge electrical circuit which is supercharged with terrestrial lightening discharges and extra-terrestrial cosmic energies from the sun, stars, and the universe.

In 1952, Winfried Schumann predicted a series of low-frequency resonances in the Earth’s atmosphere. Read on to learn about how the Schumann resonances work and how they can accelerate Spiritual ascension.

What is the Schumann Resonance?

At any given moment, the Earth experiences over 2000 thunderstorms. Every second, these produce around 50 flashes of lightning. Each burst of lightning creates electromagnetic waves that circulate around the Earth between the surface and the ionosphere 60 miles above which is the atmospheric layer containing charged particles 60 miles above the surface. Lightening creates waves oscillating with regions of higher and lower energy. These waves remain trapped inside the Earth’s ionosphere. 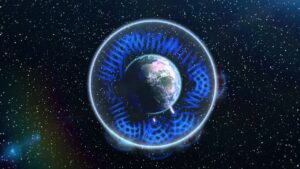 The base frequency of the Schumann Resonance is 7.83 Hertz with Schumann resonance harmonics at 7.83, 14.3, 20.8, 27.3, and 33.8 Hz. For resonance to occur, the wave must be the same length as the circumference of Earth, or at a harmonic frequency twice or three times more. The fundamental frequency for atmospheric waves is about 8 cycles per second. At this frequency, the wave will flow around the Earth and interfere with itself. The crests and troughs of the wave are aligned, and resonance occurs where the waves constructively interfere which amplifies the original signal.

Heartbeat of the Earth

Schumann thought that the heartbeat of the Earth was in alignment with alpha brainwaves and the human energy field. The Schumann Resonance influences us, and all sentient beings living on the Earth resonate with, and influence, the Earth’s frequency.

The Schumann Resonance is the peak of peak frequencies in the low frequency end of the electromagnetic spectrum of Earth’s energy field.  Scientists use the lightning discharges that occur between the Earth’s surface and the ionosphere. The waves resonate and become more powerful as the peaks of the waves constructively interfere and amplify the frequency. This creates the Earth’s pulse or heartbeat of the Earth. 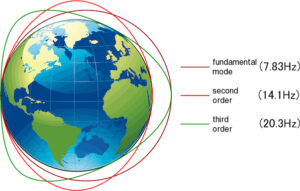 The frequencies will change if the number and distribution of lightning storms changes, or solar activity changes, or if the frequency and intensity of extra-terrestrial energy changes. The dominant frequency will play a symphony of the frequencies of 7.83 Hz, and any multiple of this. Each harmonic is normally weaker than the lower harmonic, but when the frequency increases, one of higher harmonic frequencies become dominant. The Earth’s dominant rhythm of Earth’s heartbeat changes from 7.83Hz to say 33.8Hz with harmonics at other frequencies, just like a finely tuned musical instrument.

Your body, and the bodies of all living beings on the Earth, are influenced by the surrounding electromagnetic resonant frequencies. The frequency of 7.83Hz is also the frequency of alpha waves in the human brain. This means that your brain waves peak when the Schumann resonance peaks. The alpha brainwave state is the frequency that your brain uses for relaxation, meditation, and healing. The behaviour of human beings and animals is influenced where there is a change in these frequencies.

The Earth’s frequency will change if thousands of people meditate or resonate with this frequency when facilitating an individual or group healing. The increases in the Schumann Resonance harmonics also reach the deeper Gamma brain waves are the fastest brain waves and are between 35 Hz and 100 Hz. Gamma waves are great for focus and problem solving in daily activities. 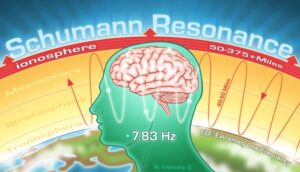 The gamma brainwave frequency connects you directly with the cosmos and the mind of the universe. You will increase your light, and the healing frequencies in your body when the gamma wavelength activities your cells. It is at the gamma frequency when you feel connected with your extra-terrestrial brothers and sisters.

You heal and regenerate when the Schumann Resonance is lower. Then it is easier to enter the deeper delta wave states. This allows you to absorb and integrate peak activity in the higher gamma states. The deeper brainwave states and the resonance of your heart and soul will ground you at a higher vibration and frequency. Then it is easier for deep spiritual meditation and energy healing to work as you connect with the ascension energies of the higher Earth and 5D awareness.

Is the Schumann Frequency Speeding Up? 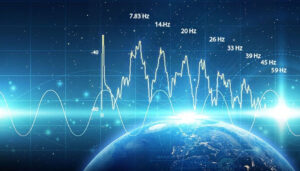 However, as you live in this space-time matrix, you are subject to the same rate of flow of time. If the universe speeds up, then you will speed up with it. You may feel that everything is getting faster but physically time appears to flow at the same rate.

Once what you may have perceived to be 24 hours now feels like it is only 16 hours. Clocks still measure the same amount of time in seconds, minutes, and hours. However, due to the Earth’s increased heartbeat, you may perceive time passing faster. Whilst actual time flows the same, your perception of time has increased with the heartbeat of the Earth.

Ancient civilisations were fully aware of the relationship between human beings, the Earth, and the cosmos. Ancient cultures have used different approaches including astrology and numerology to interpret the observations and cycles of the Earth and stars.

The cosmos is influencing your life on Earth and cosmic information communicates with the Earth and you via light codes and language. The extra-terrestrial energy of the universe, the different streams of cosmic energy and light codes, influence you on Earth. You also influence the universe.  The Earth’s ionosphere interacts directly with cosmic energy and this in turn impacts Earth and alters its heartbeat.

Planet Earth, and all sentient beings who live on the Earth, are influenced by the extra-terrestrial energy of the universe. Therefore, there have been more spiritual awakenings in recent years as the cosmic light codes and ascension energies resonate with the weakening of the Earth’s magnetic field and the increases in Schumann resonances.

The Earth is vibrating at a higher frequency as it transitions into the higher Earth of fifth density. As the Earth moves into a higher pattern of consciousness, the brainwave states of all sentient beings are influenced. The Earth’s resonance triggers them.

As the earth experiences changes in energy, its Schumann frequency rises, and the Earth’s physical particles spin faster. The particles become lighter as the waves oscillate faster meaning that everything becomes less dense, and the Earth ascends. This makes spiritual awakening and ascension easier as the extra-terrestrial and multi-dimensional ascension energies become accessible to more and more people.

Navigating the Frequency Shifts for Ascension

We as a human civilisation are ascending into higher consciousness and we are helped by many higher dimensional and extra-terrestrial beings and energies. There are many things that you can do to tune into the ascension energy and extra-terrestrial information, light codes, and activations, which the Earth receives from the cosmos. 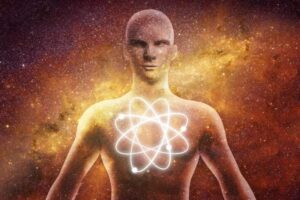 It is important to adopt a plant-based diet that encodes your cells with a higher frequency. This helps with DNA activation and aligning with the lighter higher frequency energies. Remember to exercise your body every day to get your energy flowing, and drink fresh and filtered water. This helps you to integrate the powerful ascension energies.

You can connect with the higher frequencies of the Earth and the cosmos any time you meditate and when you connect with like-minded spiritual souls. Focus on your heart to transcend the pettiness of 3D daily life and embrace the divine masculine and feminine energies. Also, you can connect with the Earth’s heartbeat by walking and meditating in nature, and with the extra-terrestrial energies at night under the stars.

Discover more about the role of cosmic energy, extraterrestrials, and ascended beings with the Star Magic meditation library and start your ascension journey with energy healing and communication with your higher-dimensional extra-terrestrial brothers and sisters.

Accelerate your voyage through life and ascension with infinity which is free for 7 days. This is your cosmic blueprint of divine and extra-terrestrial guidance full of spiritual workshops, extra-terrestrial light language activations, healthy living tips, energy healing courses, and so much more.

Remember also to visit our website starmagichealing.com. We have some of the best ascension and energy healing tools for expanding your consciousness, healing your entire being, and raising your vibration.